For dinner tonight, I made chicken sausages.  We have a great market here called Sprouts and they have the best chicken sausages (and pork sausages).  Today, I chose their chicken basil sausage for this recipe.  I usually boil my brats in beer before grilling them, so thought I would pour a Sauvignon Blanc wine over the sausages to cook them before sauteing them. I let the sausages cook on medium heat for about 25 minutes, until most of the liquid was absorbed.  I should also mention that I poked small holes (about 4) in each sausage for the flavor to really seep in.  While they were cooking, I cut up a red pepper, a yellow pepper and a small onion.  I added the veggies to a different pan that I had heated about two tablespoons of olive oil in.  Once the veggies started to soften, I added a tablespoon of butter to the pan, then added the chicken sausages on top, poured a cup of wine over that and added a bag of baby spinach and let it wilt.  It looks like a lot of spinach, but when all is said and done, it really reduces down.  I let the chicken cook together with the veggies, spinach and wine for about ten more minutes and in that time, I heated some rustic panini rolls from Trader Joe’s.

Once the rolls were done, I cut them open and placed a sausage, a good amount of peppers and spinach on top, and topped that with fat free feta cheese crumbles.  This was really tasty!  I liked that the flavor of the wine really came through.

For a side, I served heirloom tomatoes.  I halve a pint of heirloom tomatoes and place them on a platter.  I sprinkle, dried basil, kosher salt and fresh ground pepper over the top.  I cooked three cloves of garlic in a tablespoon of olive oil until I could just start to smell the garlic.  Once this happens, I immediately remove the pan from the heat.  I don’t want the garlic to overcook or burn.  I pour the oil and garlic over the tomatoes and top with fresh cut chives.  This is so simple and yet so flavorful.  My daughter’s friend loves these tomatoes so much, I one time made them before school on his birthday so she could take them to him at lunch. 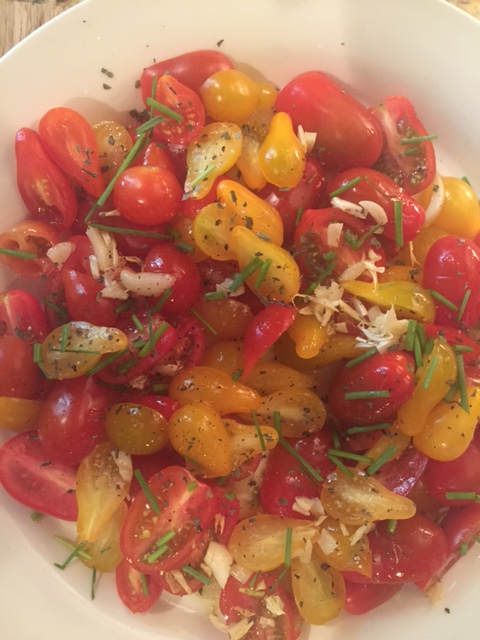