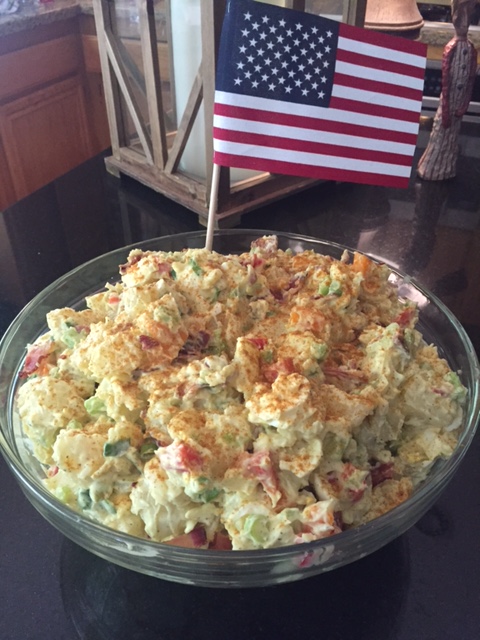 My good friend, Cathy, and her husband have invited us to celebrate the 4th of July with them and over 80 of their closest friends.  Cathy and Mark are celebrating this 4th of July for the first time as American Citizens.  Cathy is my adorable British friend, and her and Mark have just become citizens.  They wanted to celebrated the 4th with a good old fashioned barbecue with hot dogs, hamburgers, and all things American.  I told her I would make a Potato Salad to go with their menu.

After peeling ten pounds, yes ten pounds, of red potatoes, I put them in a pot of salted water and set it to boil.  While the potatoes were boiling, I took the time to dice up 8 stalks of celery, 1 red pepper, 1 orange pepper, and 5 scallions.  I also sliced 12 hard boiled eggs.  I cooked a small package of bacon to add to this potato salad as well.  I set aside my vegetables and prepared the dressing for my salad.  For the dressing, I used 5 cups of reduced fat mayo, 4 tablespoons of yellow mustard and 3 tablespoons of white vinegar.  I set this aside in the refrigerator until I was ready to put the potato salad together.  You can easily cut this recipe in half for a smaller crowd.

After the potatoes were cooled, I mixed in the cut up veggies and eggs.  After I had combined all the ingredients, I added in the bacon and then poured over most of the dressing, reserving one cup.  I wanted to reserve a cup in case my potato salad needed more dressing after sitting overnight.  It’s much easier to add the extra later than take it out if you’ve used too much. (By the way, I went to the refrigerator to check on my potato salad this morning, and no extra dressing was needed.  It was perfect as is.) 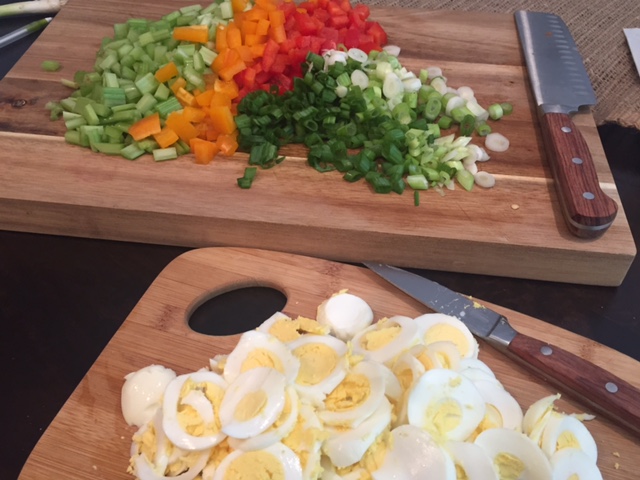 After the potato salad was mixed and ready to be refrigerated for the night, I sprinkled paprika on for color.  I’m sure this will be a big hit at my friend’s party.  I certainly hope it is! 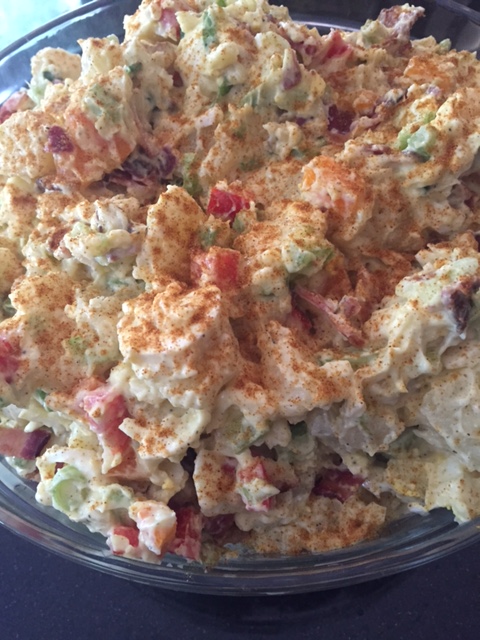 Happy 4th of July, Everyone!