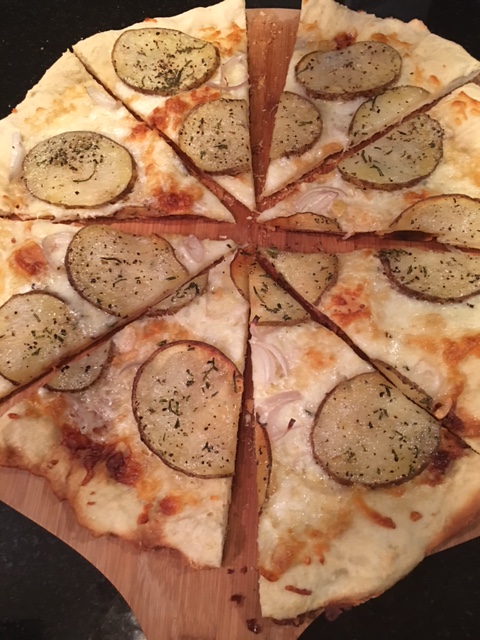 Today would have been my Dad’s 74th birthday if he were still with us on this earth. He is with us in our hearts, this is for sure. My Mom, Sister and I miss him terribly, as do his grandchildren and sons-in-law. He was the best Dad, Grandpa and husband ever. Certainly, a wonderful man. I was always very proud of my father.

My Dad’s favorite meal was meatloaf, or hamburgers. I remember my Grandma telling me that when my Dad was a kid, he loved hamburgers for dinner. She told me that she had made burgers 43 nights in a row in hopes that he would tire of them. My Dad did not get tired of burgers. He always said “The best meat is ground”. I probably should have made burgers tonight in honor of my Dad’s birthday, but that is what I had planned for tomorrow night’s dinner. Since it’s Sunday night, and there is football on …. again, I made homemade pizza.

I decided on a roasted rosemary potato pizza. This would have no sauce, just olive oil. It was very light. I went light on the cheese as well, as you can see from my pictures. I sliced a russet potato on my mandolin and laid the slices out on a jelly roll pan. I drizzled olive oil over the potato slices and then sprinkled kosher salt, fresh ground pepper and minced, fresh rosemary over the top and roasted them in a 425 degree oven for 15 minutes.

Picture on the left is before roasting, on the right is just after I removed them from the oven.

I set the potatoes aside and minced a couple cloves of garlic in a tablespoon of olive oil for 45 seconds. I set that aside, off the heat, along with the potatoes until I was ready with my crust.

Let me just say, my kitchen smelled so good. I am going to find myself a rosemary scented candle somewhere. I love the scent of fresh rosemary!

I always buy pizza dough at Trader Joe’s and tonight was no different. One of these Sundays, I’m going to make pizza dough from scratch and I’ll tell you all about it. Once my dough had been set out on a bread board to rise for 20 minutes, I was ready to form it to my pizza pan. One I had formed my dough into a pizza, I placed it on my pizza pan and drizzled it with olive oil and then brushed the oil over the entire pizza dough. I then sprinkled a pinch of sea salt over the top. I like to pre-bake my crust before adding any toppings for about 10 minutes. This seems to give me a crispier crust, which I prefer. Once the crust had been in the oven for 10 minutes, I pulled it out and placed the toppings on. I started with mozzarella cheese. I did not add red sauce, I used just the olive oil I had brushed over the crust as my “sauce”. Once the cheese was on the crust, I placed my sliced garlic and shallots over the cheese. I added the potato slices last. I put the pizza back in the oven for another 10 minutes.

I served dinner with a simple caesar salad. I tore up romaine leaves and topped them with a pinch of sea salt, fresh ground pepper, shaved parmesan cheese and large croutons. I then topped my salad with a caesar dressing.

Dinner was simple and satisfying, just what I was looking for after a busy, fun-filled weekend.

2) Set dough out on bread board to rise.

3) Slice russet potato on a mandolin (or if you don’t have a mandolin, you can use a knife). Place sliced potatoes on a jelly roll pan and drizzle with olive oil, kosher salt, pepper and rosemary. Roast for 15 minutes. When done, set aside.

4) Sauté garlic in olive oil for 45 seconds, just until fragrant. Immediately remove from heat as you don’t want it to burn. Set aside with potatoes.

5) Form dough into a pizza crust and place on your pizza pan. Brush crust with olive oil and sprinkle with a pinch of sea salt. Bake in preheated oven for 10 minutes. After 10 minutes, remove from oven and top pizza. Start with mozzarella cheese, next add garlic and shallot, and then potato slices. Place back in oven for 10 minutes.