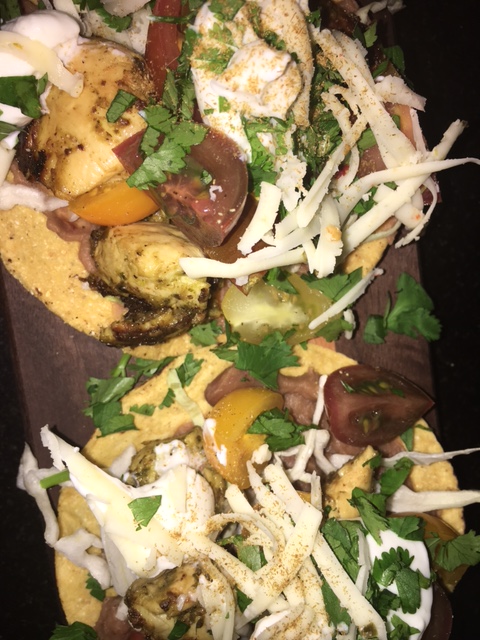 One of my favorite fast food restaurants is El Pollo Loco. I’ve always enjoyed El Pollo Loco, but even more so now that they’ve introduced an under 500 calorie menu. This is where I choose to eat if we happen to be heading out for a quick bite on a weeknight because I know I can eat healthy and my meal will be right around 460-480 calories. I leave feeling good about what I’ve eaten, and not too full. Most recently, they introduced chicken tostadas to their under 500 calorie menu. This is what I’ve ordered the last several times I’ve gone in, so I decided I would make my own version for Taco Tuesday this week.

I bought a package of chicken tenders that was just over one pound. I cut each tender into four chunks – about 1-1/2 inch pieces – and placed them into a glass bowl. In a smaller glass bowl, I mixed together kosher salt, pepper, dried oregano and cumin. I poured the seasonings onto the chicken and mixed it all together. 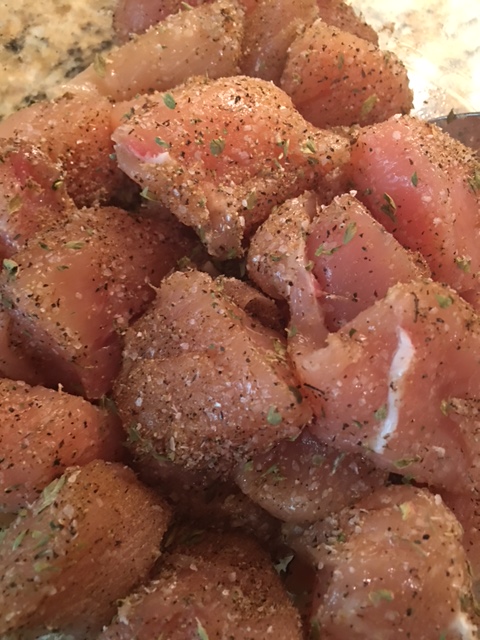 I then added 2 teaspoons of jarred, minced garlic and mixed that onto the chicken. After I mixed the garlic on, I added the zest and juice of two limes. 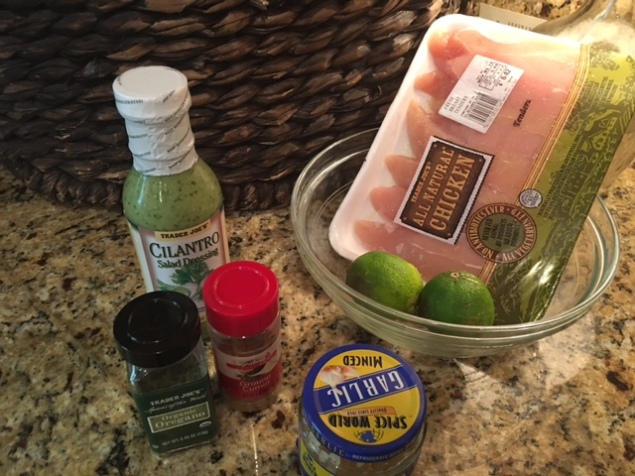 Once everything was mixed into the chicken, I added a bottle of cilantro salad dressing. I bought this particular one at Trader Joe’s. I’ve also bought Cilantro Pepita Salad Dressing that I find at Vons. I’ve used that one before to marinate chicken breasts, it’s so good. 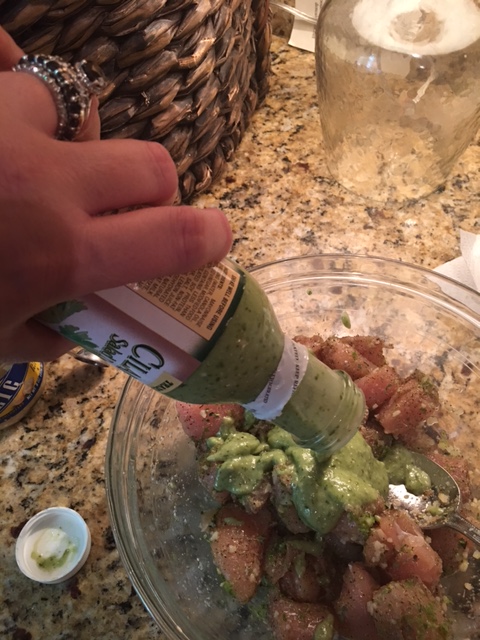 I covered my chicken with plastic wrap and placed the bowl in the refrigerator to marinate for four hours. When I was getting ready to cook my chicken, I took it out of the fridge to come to room temperature. While it was coming to room temperature, I prepared my toppings for my tostadas. 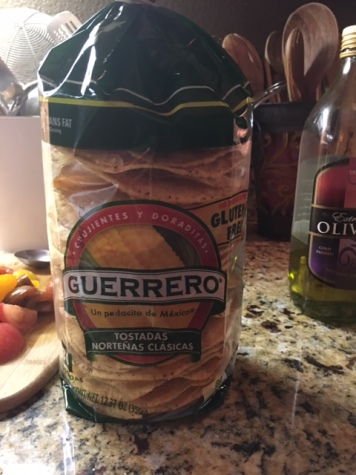 I sautéd the chicken in one tablespoon of olive oil for about 20 minutes, until the liquid from the marinade had reduced. I scraped up the brown bits from the bottom of the pan for extra flavor.

I heated a can of fat free, vegetarian refried beans. This would be my “glue” and base for my toppings. I spread the beans on my tostadas and layered from there. By the way, these tostadas were only 120 calories for two, not bad! Once the beans were down, I added shredded green cabbage. On top of that I added my chicken, quartered heirloom tomatoes, cilantro, shredded pepper jack cheese and a dollop of sour cream that I topped with a sprinkling of cumin for color. 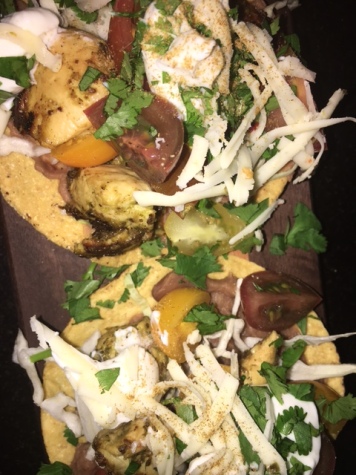 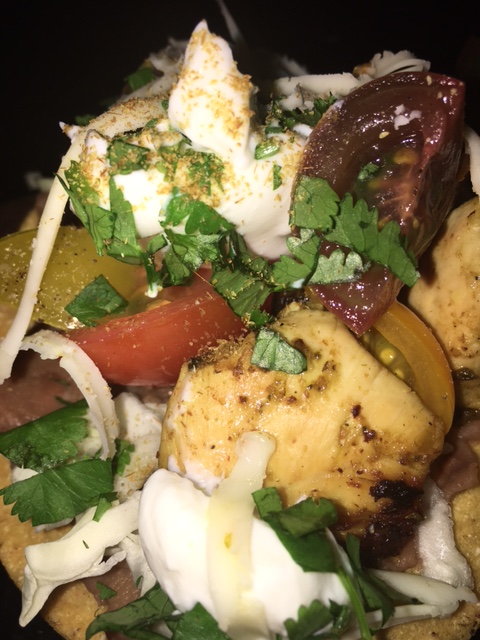 I didn’t show it on my pictures, but I also topped my tostada with a half an avocado. This was a compete meal, you don’t even need tortilla chips because, let’s face it, a tostada is like one big tortilla chip. I used an entire package of mini heirloom tomatoes, which were too many. I did this on purpose though, as I wanted those leftover tomatoes for my lunch tomorrow. I packaged them up with the leftover cilantro and a tablespoon of shredded pepper jack cheese. This will definitely be a light and refreshing lunch for me.

My dear friend, Sandi, had sent me a message asking for simple, cost effective meals she can put into her crockpot. I definitely think this chicken would cook well in a slow cooker. Sandi, if you’re reading this, you could marinate the chicken overnight and in the morning, put it all in the slow cooker, set it to cook on low for 8 hours and you will come home to a wonderful meal. All you have to do is get your toppings and beans ready. Enjoy!

Cut chicken tenders into 1-1/2 inch pieces (you will get about 4 pieces per tender). Place in a glass bowl. In a smaller glass bowl, mix together salt, pepper, oregano and cumin. Pour over chicken and mix together with the chicken. Add the minced garlic and the zest and juice of the limes, mix again. Add cilantro dressing and cover. Refrigerate for 2-4 hours.

Heat olive oil in large sauté pan. Add chicken and all of marinade. Cook until chicken is no longer pink in the middle and marinade reduces and thickens – about 20 minutes. Scrape up any brown bits off the bottom of the pan.