I’ve been wanting to make “stuffed” baked potatoes for a while. It was cloudy and chilly in San Diego yesterday and it rained all through the night. The rainy weather called for comfort food. It is Tuesday, and I wanted to make a “Taco Tuesday” dinner, but decided to make my tacos in a baked potato. We’ve all probably had a stuffed baked potato at some point – maybe it was stuffed with broccoli and cheddar, maybe it was filled with chili and cheese. You could stuff a potato with whatever suits your fancy.

I started by baking my potatoes. I like to season the outside of my baked potato with olive oil, kosher salt and fresh ground pepper. I always eat the skins on a potato. My paternal Grandma had one time told me that there are so many nutrients in the skin and I never forgot that. I was probably just a new teenager when she mentioned this to me and it has stuck with me ever since. I like the potato to have a nice crust on it and brushing it with olive oil and adding a sprinkling of kosher salt and pepper gives it that perfect crust. I baked my potatoes in a preheated 425 degree oven for one hour. 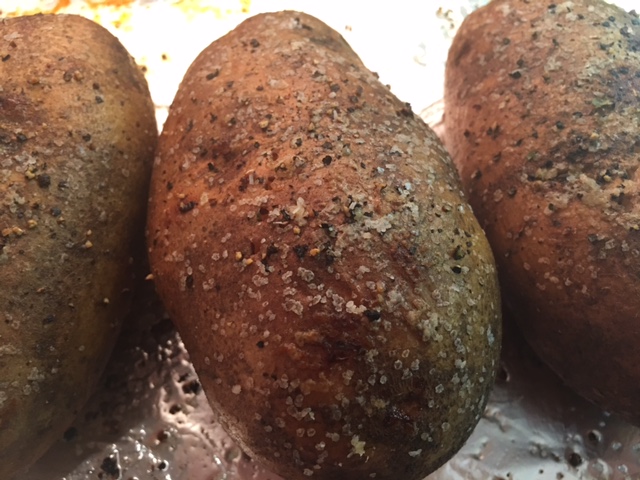 I decided tonight I would stuff our potatoes with ground turkey, seasoned with all flavors that say “taco” and a jar of salsa.

Give these Mexican stuffed potatoes a try, I think you’ll like them.

Preheat oven to 425 degrees. Line a baking sheet with aluminum foil. Brush potatoes with olive oil, kosher salt and fresh ground pepper. Bake for 60 minutes. (If your potatoes are on the smaller side, check them at 45 minutes).

Mix all seasonings together in a small bowl. Cook turkey adding the seasonings. Once the turkey is cooked add the salsa and cook for a couple minutes. Set aside.

Once potatoes are done, slice and open them and stuff with the ground turkey and toppings. Enjoy!