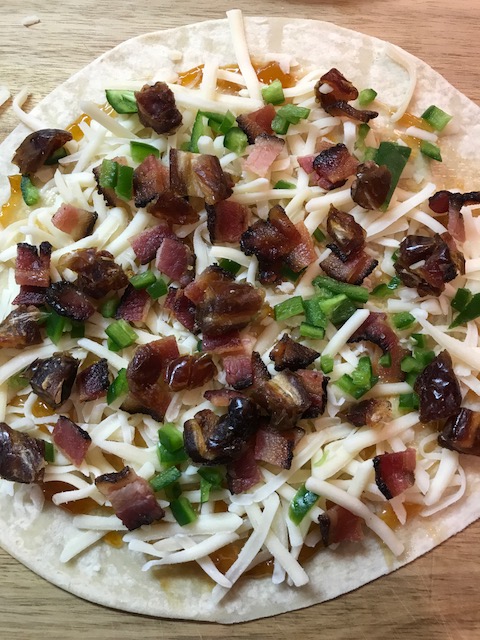 I don’t know about you, but the thought of apricot jam, bacon, dates and gruyere cheese brought together in a quesadilla sounds fabulous to me. I can tell you, I tried it tonight, and the flavors pair together wonderfully.

I used two large tortillas for my quesadilla. I began by spreading apricot jam over the inside of each tortilla.

On top of the jam on the bottom tortilla, I sprinkled a half cup of shredded gruyere cheese. Over the cheese, I sprinkled chopped, cooked bacon, chopped fresh dates, and a half a jalapeño that I had diced (seeds removed).

I placed the second tortilla on top of the ingredients and cooked it a large skillet that I had heated a couple of tablespoons of olive oil in. Once I placed the quesadilla into the skillet, I brushed a small amount of olive oil on the top tortilla.

This quesadilla was definitely big enough for two people. You would only need a small green salad to round out the meal. I think it would be wonderful served as an appetizer and cut into small pieces.