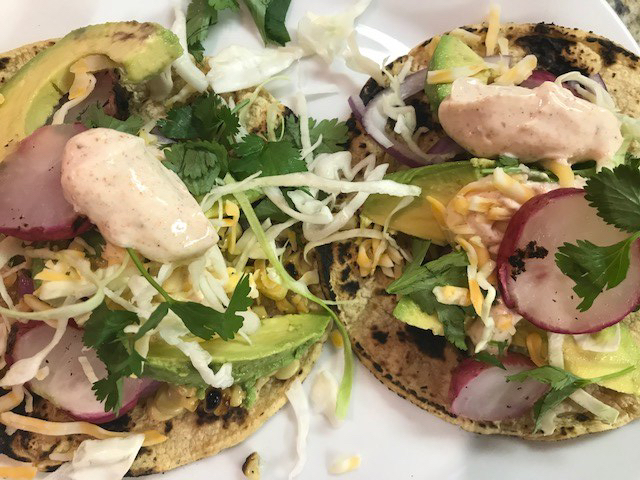 I meant to post this recipe last night, which would have made it a “Meatless Monday” meal. However, I decided to spend time with my daughter and run an errand with her so it has now turned into a “Taco Tuesday” meal. It was going to be a win-win either way.

A friend of mine, Kris (great name 🙂 – she’s actually Kristine, where I am Kristin), sends out a magazine through her real estate business each month called “American Lifestyle”. I enjoy reading this magazine each time it arrives to my mailbox. There is a recipe card included in each issue and this month I saw the words “crispy avocado tacos”. I didn’t look at the recipe, as I never look at a recipe before making something on my own. I want to make sure I come up with each of the recipes I share with you all. That being said, when I saw the words “avocado” and “tacos”, I decided I’d make some sort of avocado tacos this week for dinner.

I bought a package of corn on the cob from Trader Joe’s produce department. They did not have fresh corn on the cob available yet, so I went with the prepackaged.  I bought a couple large avocados and a bunch of radishes. As always, when I’m making tacos, I buy a package of cilantro. Cilantro is something you either love or hate … I’m a lover. I had a red onion on hand, so sliced half of it to use in my tacos as well.

I started by brushing a minimal amount of olive oil and sprinkling kosher salt and fresh ground pepper over each ear.

Doesn’t this look fresh? I tried to keep this meal as “clean” and fresh as possible. I used very little oil for this meal and the only real seasoning I used was in the Greek Yogurt topping I put together as a sauce for my tacos.

For the sauce, I mixed together an 8 ounce container of plain, non-fat Greek yogurt, the juice of two limes, Chile lime Seasoning and sea salt.

I grilled my corn on an indoor grill pan on the stove-top. I kept turning the corn until it had the char I was looking for and the corn had finished cooking. This took about 25 minutes.

I was about to slice my radishes for the tacos, when I decided I’d throw them onto the grill pan with the corn. Why grill your radishes you might ask. Why not? is the question I ask you. This turned out to be a great idea. I sprinkled a tiny bit of sea salt on the radishes and placed them on the grill pan until I thought they were just soft enough.

The radishes weren’t super soft, but just soft enough. They actually tasted really good grilled. This is definitely something I’ll be doing again.

Once the corn and radishes were done, I set my corn tortillas on the open flame on my gas stove. I char them just enough on each side. It only takes about 45 seconds per tortilla, flipping about half way through.

I removed the corn from the stalks and cut my radishes in slices. I also sliced half a red onion to be included in my tacos and cut two avocados into slices. 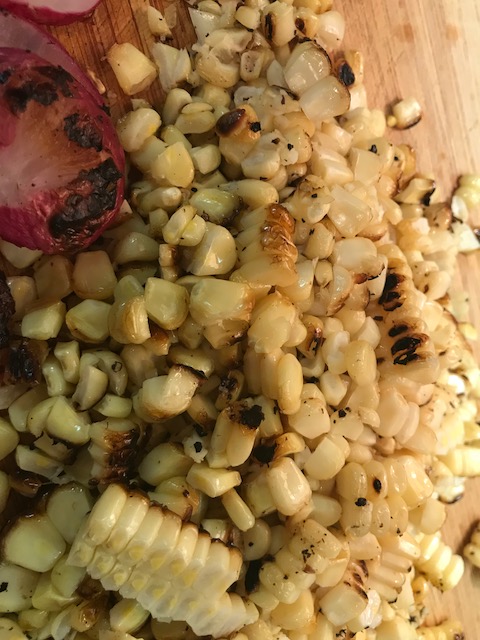 This dinner tasted so fresh and healthy. I love to see the different colors of fresh produce in my meals because I know I’m doing the right thing for my body and my health. 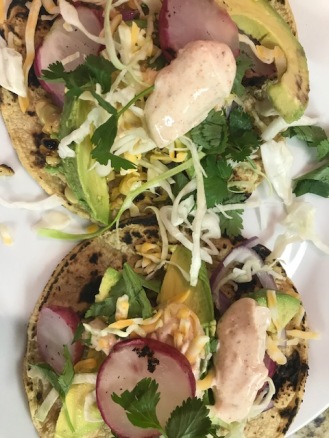