Since it’s Monday night football, and the Packers are playing – and the Brewers are playing in the playoffs against the Dodgers, I thought it would be a good night for a homemade pizza. Go Packers! Go Brewers! How can both our favorite teams be playing on the same night, at the same time?!

I found a new pizza crust at Trader Joe’s and it’s like a big flatbread. I grabbed it a couple weeks ago and threw it in the freezer because I knew I’d want to make a homemade pizza with all the great football and baseball games to watch. I really like this new crust by Trader Joe’s.  A big plus for me, besides the taste, was that the crust has just 150 calories for 1/4 of the crust, which I don’t think is bad at all. 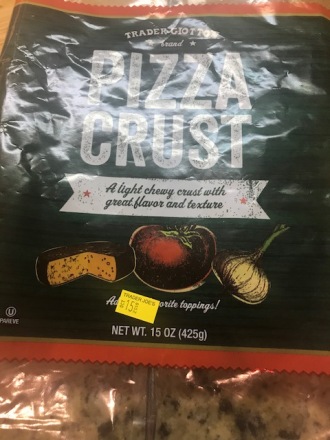 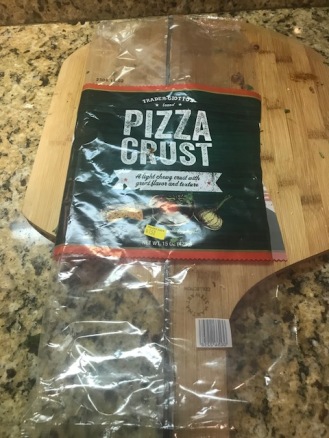 I started out by baking 3/4 pound of chicken tenders that I seasoned with kosher salt, pepper, and red pepper flakes before brushing it with barbecue sauce. I baked the tenders at 375 degrees for 25 minutes.

While the chicken was baking, I sliced 1/3 of a red onion, 3 jalapeños – removing the seeds, and shredding close to 1/3 pound of gruyere cheese. Once the chicken was done and had cooled a couple minutes so I could handle it, I cut it into bite size pieces.

I spread some barbecue sauce onto the crust and simply topped it with the cheese, onion, jalapeños and chicken and placed it into a preheated 425 degree oven for 12 minutes.

Once it was done, I sprinkled freshly minced cilantro over the top for garnish. 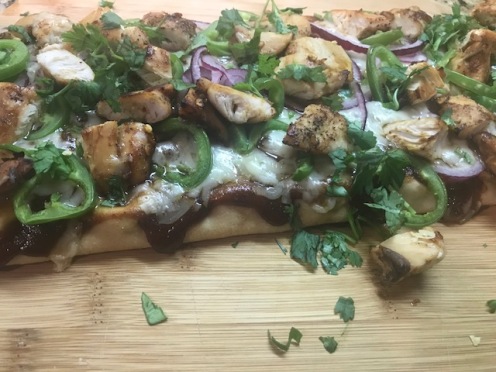 This pizza had a nice kick to it, without being too hot. There was definitely a lot of flavor in this one – and that’s a good thing :).