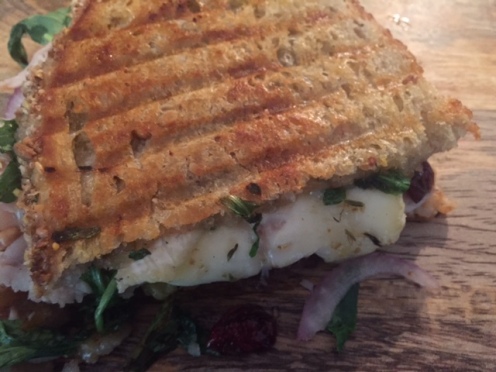 Tuesday evenings at our house mean group dog training for Remington.  Since we need to be in Pacific Beach by 6:30, this means a quick supper.  One that I can make quickly, we can eat relatively quickly, and clean up even more quickly.

Tonight, I decided I’d make panini sandwiches.  I used my favorite bread for this type of sandwich.  I buy it at Trader Joe’s.  It is the Multigrain Sourdough Bread with Sunflower and Sesame Seeds.  I love this bread for a BLT as well.  That is typically our Thursday night supper, as we need to eat quickly on Thursday nights as well.  That would be the night my husband plays on his men’s softball team.  The Fast & Furious needs to be both fast and furious, so we try to eat light that night.

For tonight’s sandwich, I made a spread out of orange marmalade and fig jam.  I added a bit of dried French thyme, sea salt, and a very small pinch of sugar to the mix, mixed it together and that made the spread for the sandwich.  I first brushed a bit of olive oil on the outside of each slice of bread.  I spread the marmalade/fig mix on the inside of each slice.  I then added thinly sliced red onion and a sliced yellow heirloom tomato to one slice of the bread.  I then sprinkled dried cranberries on top of that.  The sliced deli turkey was then placed over the cranberries, followed by arugula. (I didn’t even know what arugula was a few years ago.  Thank you so much to Ina Garten for introducing me to my new favorite green for sandwiches … and salads, of course.) After the arugula, I laid three small slices of Brie cheese that I cut from my Brie wedge.  I proceeded to place the top slice of bread, spread side down (olive oil brushed side out) over the Brie and placed the sandwich in my panini maker.  I let it heat through and toast until the Brie was melting and oozing out a bit.

My sister, Cherie and her husband bought me this panini maker for Christmas a couple years ago.  What a wonderful gift idea this was.  It really dresses up a sandwich for a nice little supper.