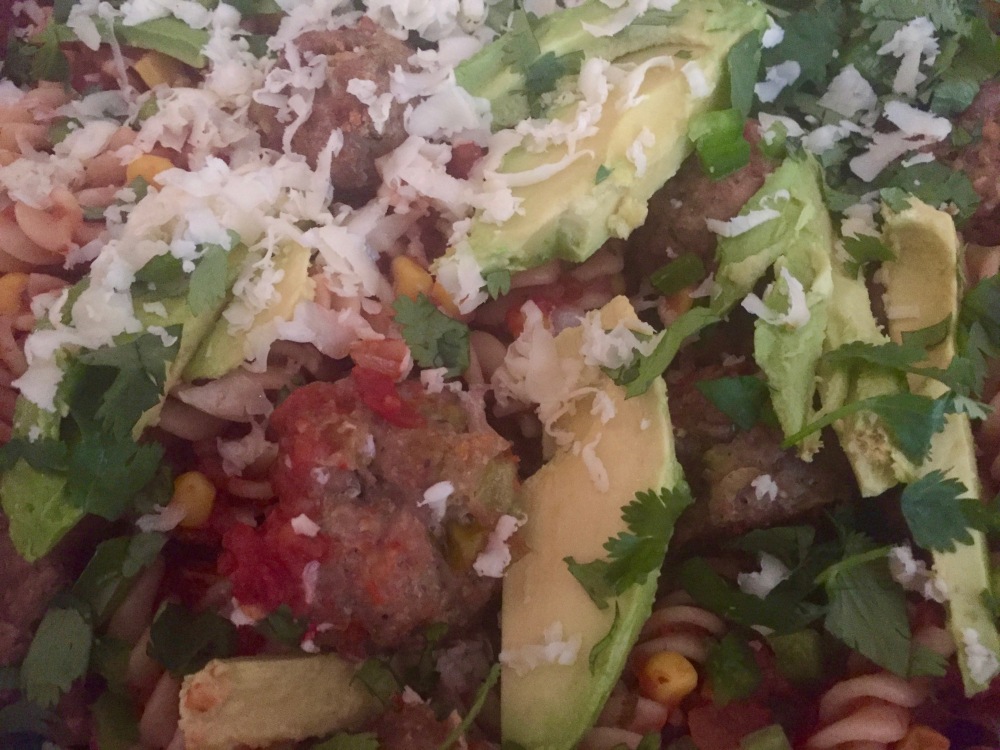 Wednesday night, I decided to make something I haven’t made in many years.  Mexican spaghetti was a dish I made when Dennis and I were first married.  This was out of necessity one night when I was making pasta and realized I didn’t have any spaghetti sauce.  Hmmm, I thought?  What should I do now? As I looked in the pantry, I came across a jar of salsa.  Mexican spaghetti was created and brought into our dinner rotation.  The other night, I decided to make it with Fusilli though instead of spaghetti noodles.  I also added quite a bit more to it than in the first years I made this dish.

I grated two cloves of garlic and one large, diced shallot into a pound of ground turkey.  One teaspoon of kosher salt and a half teaspoon of black pepper were also added.  For moisture, I added an undrained can of mild diced green peppers.  Wow!  This really made my meatballs moist.  Yum, yum, yum!  A also added 1/4 cup of breadcrumbs.  I mixed this all together with a fork to keep it light and fluffy.  I used a cookie scoop to measure my meatballs and place them on the baking sheet.  They were baked at 350 degrees for 30 minutes.  Perfecto, if I don’t say so myself. 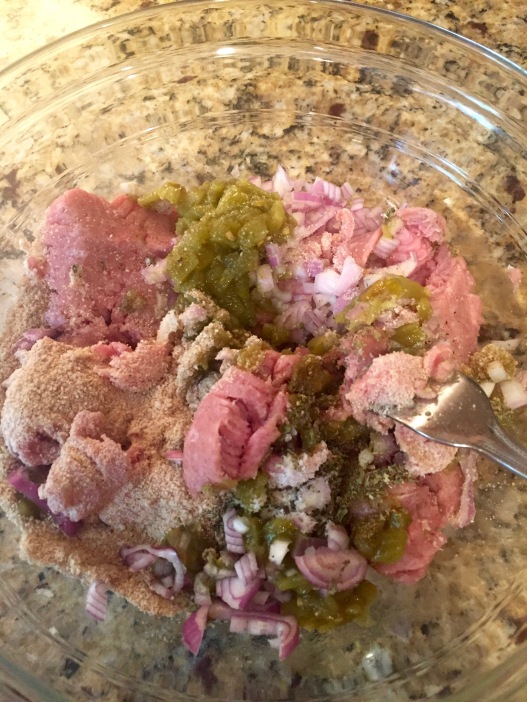 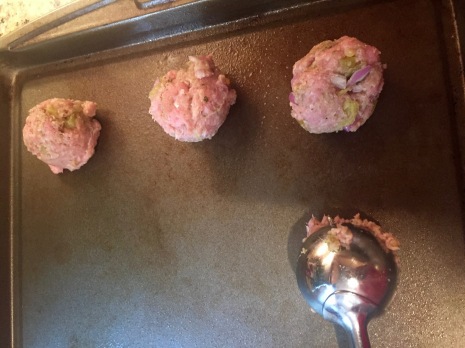 While my meatballs were baking, I prepared my rolls.  Since I wanted this to be a Mexican based meal, I combined 1/4 cup of olive oil with 1/2 teaspoon of dried oregano, three dashes of Mrs. Dash Salt Free Southwest Chipotle seasoning and 1/8 teaspoon of Fleur de Sel finishing salt.  I mixed this together in a small bowl and brushed it over my rolls.  You can use any roll or bread you like, but I used the Trader Joe’s Panini Rustic Rolls, half-baked.  I placed them on my baking sheet and brushed the olive oil/spice mix over each roll.  I put them in the oven for about 15 minutes.  These were really good, with quite a kick of flavor.

I wanted to make a sort of Mexican Caesar salad.  I started with romaine that I tore up and put into a bowl.  I added the Heavenly Village Marzano Tomatoes from Trader Joe’s.  (My friend, Karin, introduced me to these tomatoes.  They are so good, I eat them right out of the bag for a snack.)  I halved them and added them to my romaine, I shredded pepper jack cheese over the top, added thinly sliced red onion, diced jalapeño (seed and membrane removed) and I cut up fresh mango.  I topped the salad with chopped cilantro for freshness.  I sprinkled kosher salt, fresh pepper and a little garlic powder onto my salad. 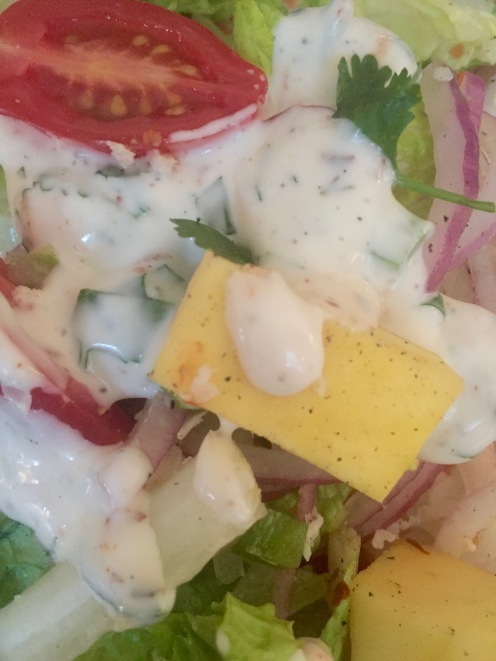 I then made my dressing.  This was super simple.  I used light Ranch Dressing out of the bottle, added a couple shakes of the Mrs. Dash Salt Free Southwest Chipotle, a sprinkle of kosher salt, fresh pepper, diced jalapeño and chopped cilantro.  Easy peasy, super tasty.

I boiled my Fusilli noodles and drained them.  I put them in a bowl, where I added three medium size jars of salsa (I used a chipotle salsa, you can use anything you choose.).  I added a can of corn, drained, and mixed this together.  I topped it with my meatballs, diced jalapeño, avocado, pepper jack cheese and cilantro.  Voila!  Here’s a picture of the finished pasta dish.  I hope you try this and if you do, I hope you enjoy it as much as my family did. 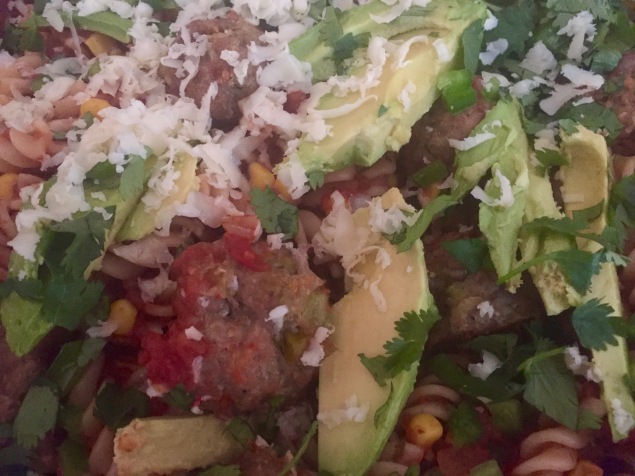 After dinner, we were packing the leftovers up, etc. and I decided to make my husband a sandwich for lunch the next day with one of the leftover rolls, a few leftover meatballs, salsa, chopped cilantro and pepper jack cheese.  A little lunch out of the leftover, perfect!  This would have been great with a simple arugula salad.  I love arugula, Dennis not so much.  Chips it was for him.