Since I only used a couple Italian sausages from a package yesterday, I wanted to make something for dinner tonight that would ensure I could finish off the rest of the package. Also in my refrigerator were a couple packages of tomatoes that I wanted to use up – one 16 ounce package of mini heirloom tomatoes and an 8 ounce package of grape tomatoes and a 10 ounce package of kale that needed to be eaten. This made planning my dinner for tonight an easy process. Yesterday, while grocery shopping I grabbed a package of rigatoni and a bottle of Pinot Grigio. All this came together as a one pot meal, basically. The only extra pot was the one I boiled my rigatoni in. No strainer was needed, keeping dishes to a minimum. I like to take my pasta directly from the pot I boiled it in to the skillet that I’m using to make my sauce.

I started by removing the casings of three sweet Italian sausages and browning them in a large skillet (I used no oil). After about 7 minutes, the sausages were browned and I added the packages of tomatoes, 1/2 teaspoon of red pepper flakes and 1-1/2 teaspoons of Italian seasoning and let the sausage and tomatoes cook together for about 5 minutes. After 5 minutes, I added four cloves of fresh minced garlic and let that cook together for just about a minute. 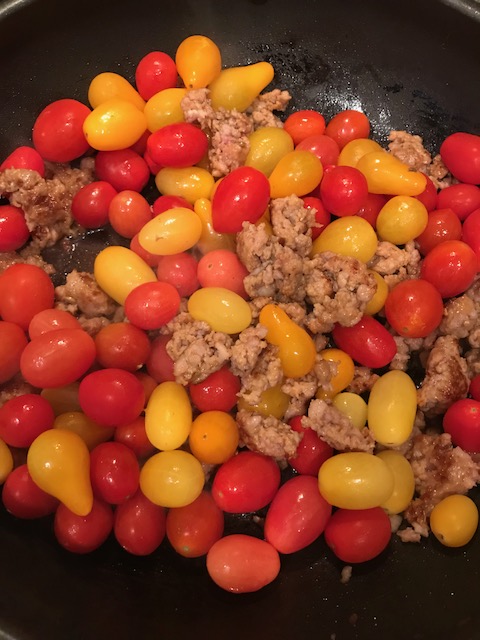 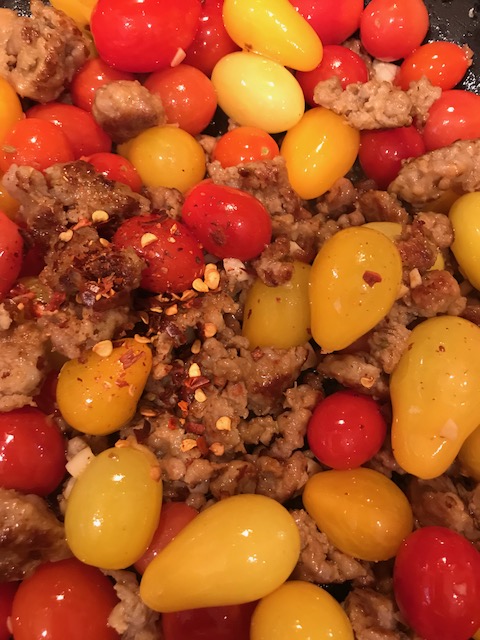 Once the garlic had cooked together with the tomatoes and sausage, I added 1/4 cup of white wine and 1/2 cup of low-sodium chicken broth. While the pasta was boiling, I let the sauce cook together in the skillet, giving the tomatoes a bit of time to burst. 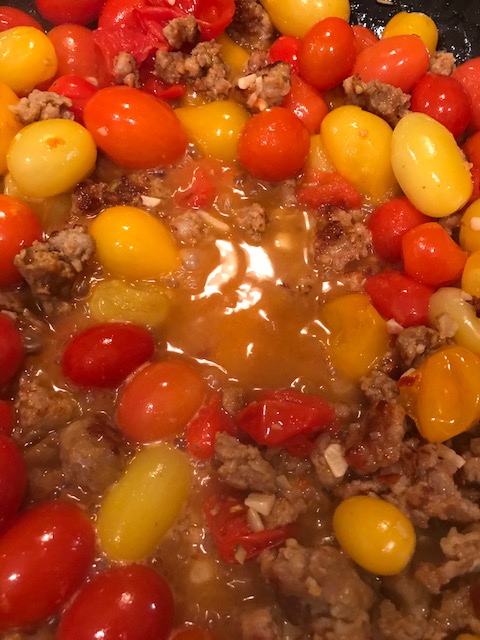 Once the pasta had 6 minutes left to cook, I added a 10 ounce package of kale to the pot.

I added the rigatoni and kale directly to the skillet, adding grated parmesan and mixing everything together. 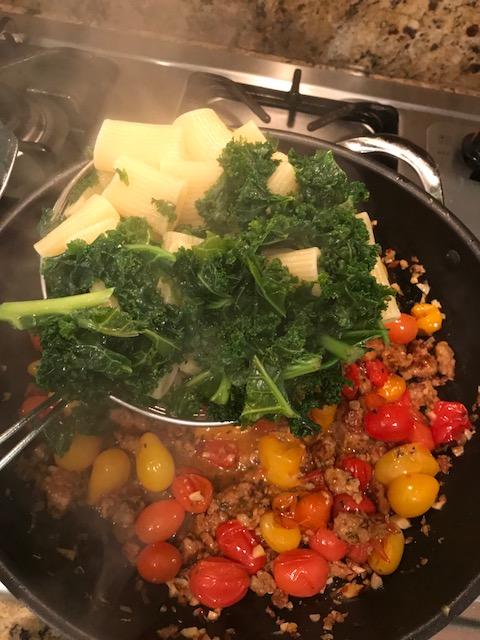 Note: The only salt I added for this dish was to season the pasta water. Italian sausages have enough salt in them. If you feel you need to add salt to your tomatoes, please do.

Add wine and chicken broth to skillet and let simmer while pasta cooks and tomatoes start to burst.

Cook pasta. Once there is 6 minutes left to cook rigatoni, add kale to pasta pot.

Add cooked pasta and kale directly to skillet with sausage and tomatoes. Combine and add grated parmesan. Mix together.