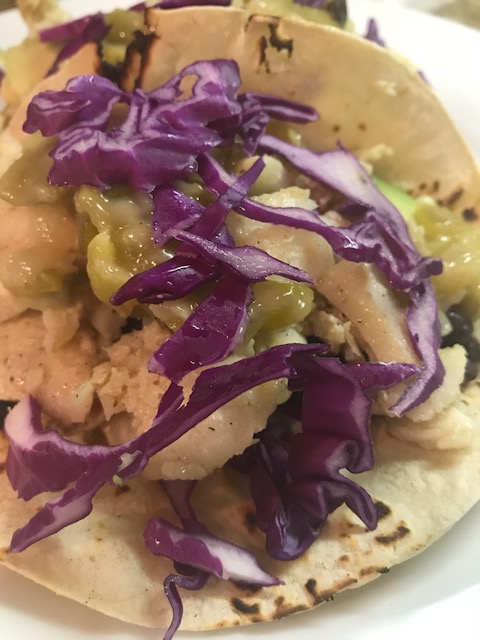 When I was at the market the other day, they had boxes of Hatch chiles set out and they were just $1.88 a pound. The season for Hatch chiles runs from the beginning of August to the end of September. I wanted to take advantage of these chiles, so bought four to make a sauce for fish tacos.

This sauce was magnificent on the tacos we had for dinner tonight and I know it would be fantastic over chicken or served on a turkey burger. I am definitely going to keep a recipe card on file for this sauce so I can make it over and over again.

I started by preparing my chiles to broil. I broiled them so I could easily remove the skin. I cut them in half, lengthwise and removed the seeds. I then laid them skin side up on a large baking sheet. 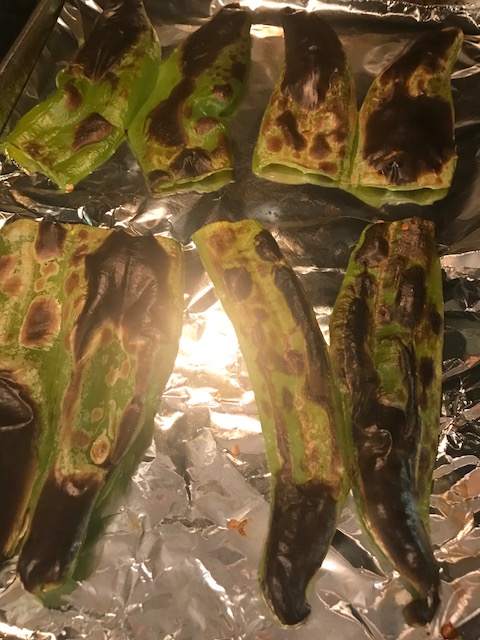 I placed the chiles into a bowl, covering the bowl tightly with plastic wrap for 15 minutes. This allowed the chiles to steam so I could remove the skin easily.

I then diced the chiles and set them aside while I started on the sauce for the tacos.

For the sauce, I heated two tablespoons of olive oil and added 1/2 cup of diced sweet yellow onion. I cooked the onion for 4 minutes until it started to soften and added 2 cloves of minced garlic, cooking for an additional 45 seconds, just until the garlic became fragrant. After the onion and garlic were cooked, I added a tablespoon of flour to the pan and stirred it into the onion and garlic. Once the flour was incorporated, I added 1 cup of white wine. I then added the diced green chiles and let the pan simmer on low while the sauce thickened.

Meanwhile, I had placed two pounds of Cod pieces into a bowl, adding the juice of two limes, kosher salt, pepper and cumin. I let this sit for 1/2 hour to marinate. When I was ready to cook the fish, I heated two tablespoons of olive oil in a large skillet and added the fish to the skillet and let it cook for 15 minutes, until the fish was done. I buy Alaskan cod at Trader Joe’s in a package already cut up. The packages come with usually between 3/4 pound and just under a pound of fish, so I buy two. It’s in their frozen section and this fish works out wonderfully for tacos. You can certainly get cod at your local market and cut it into bite size pieces yourself. 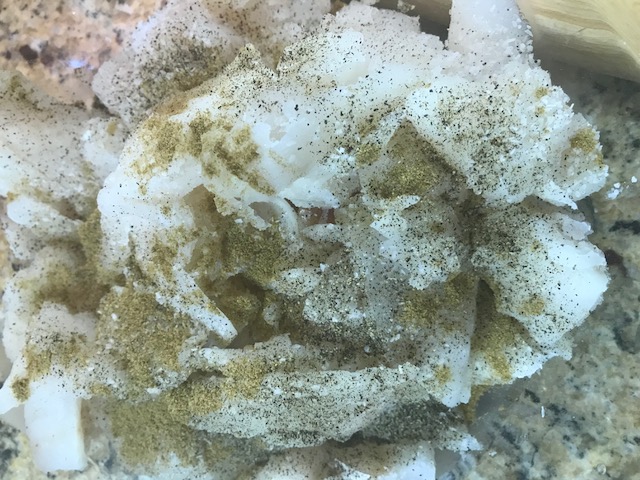 I also boiled a couple ears of corn so that I could add fresh corn to the tacos. Fresh corn, black beans, red cabbage and sliced avocado were all that were needed on these tacos, along with the Hatch Chile Sauce. 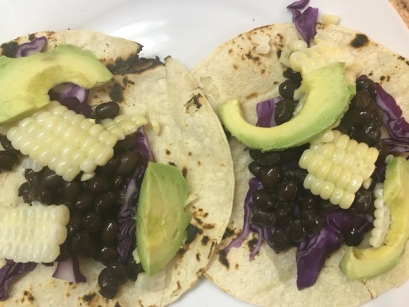 If you see Hatch Chiles at your local grocer in the next several weeks, definitely give them a try. They are so good!

Here’s a little picture of the sauce, yum!