I had a request from my daughter, Kylie, to have homemade chicken soup this weekend. She hadn’t been feeling well this past week, and this seemed to be just the thing that was going to cure her. Her only request was, “just salt and pepper for seasoning, no spices”. Hence, the super simple chicken soup recipe I came up with. It’s hard for me to use just salt and pepper, I love to add seasonings and lots of flavor to everything I make. I wanted to make this dish per her request though and that’s just what I did.

I started off by roasting three small boneless, skinless chicken breasts in a preheated 425 degree oven for 35 minutes. I drizzled a bit of olive oil over the chicken before sprinkling a pinch of kosher salt, a pinch of pepper and a pinch of dried thyme (an herb, not a spice … that was going to be my argument, should I need one).

While the chicken was roasting, I started cutting up the vegetables I would be using in the soup so they’d be ready to sauté in a couple tablespoons of olive oil. I have this great cutting tool that used to be my Grandma’s. I wanted my carrots to have a bit of a fancy edge to them, so used this to cut them. I loved telling Kylie that this used to be her great grandmother’s and I was so excited to use it in preparation for my meal tonight.

I also cut up celery and a white onion, and minced 5 cloves of garlic. 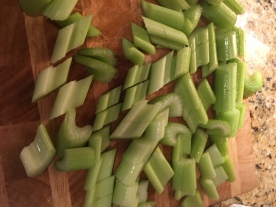 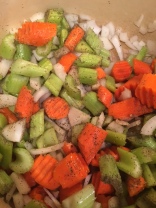 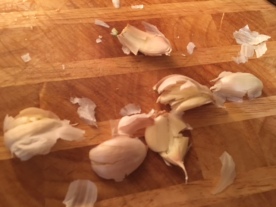 Once the chicken was done, I shredded it.

While the soup was simmering, I joined Dennis in the family room where he was happily watching the Packer game and cheering like crazy. Did you happen to see that Hail Mary pass by Aaron Rodgers? It was incredible. I’m sure the neighbors on both sides heard Dennis cheering throughout the second half of the game. 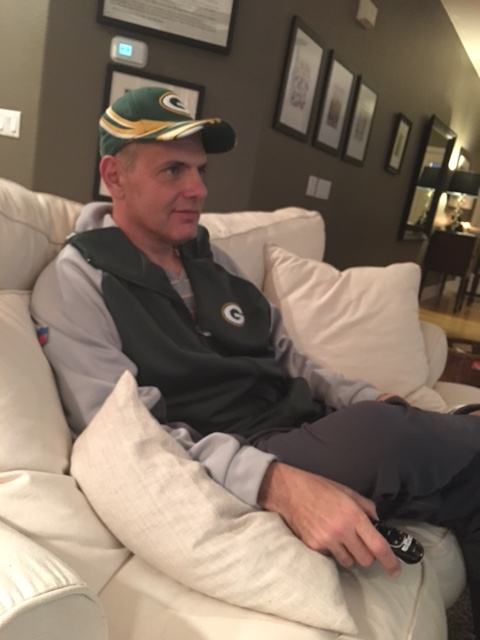 After letting the soup simmer on the stove for an hour, I added 4 cups of water. I used a half package of spaghetti noodles and broke them into small pieces to add to my soup at this point. At the same time I added the noodles and water, I added about a tablespoon of fresh thyme. I let the soup cook about another 15 minutes until the noodles were done. I served our soup with a crusty loaf of multi-grain bread. It was a simple, Sunday supper. Just what the patient ordered for tonight.

Preheat oven to 425 degrees. Lay chicken on a sheet pan and drizzle with olive oil, a pinch of kosher salt, a pinch of pepper and a 1/2 teaspoon dried thyme. Roast chicken in for 35 minutes.

In a large Dutch oven, pour 2 tablespoons olive oil. Add carrots, celery and onion and cook about 5-7 minutes, until they begin to soften. Shred cooked chicken breasts and add to vegetables, along with garlic. Add chicken broth and vegetable broth and cook over medium-low for an hour.

In last 15 minutes, add noodles and 4 cups of water. Turn heat up to medium-high.

Serve with crusty bread of your choice. Enjoy!